Working for a non-profit, I’ve gotten accustomed to using donated equipment when we get it. Recently, the credit union that Forest Home does all it’s banking through donated about 15 computers to us. They didn’t have optical drives in them (which makes sense, security wise), so I picked up 15 DVD drives for about $7 each (NOTE: it’s not easy finding old school beige drives anymore – go figure). I went to pop one of the drives in and found myself at a loss. The cases 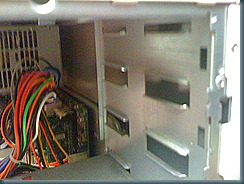 are the kind that use rails on either side of the drive to mount them.  Since the systems didn’t have drives in them, they also didn’t have the rails!

After a little bit of brainstorming with some pretty smart guys in our maintenance department, we can up with a cheap, easy solution. I bought some 1” x 1/8” aluminum bar stock and some heavy duty mounting tape at the local Home Depot. We then cut down the aluminum bar stock into 5.5” 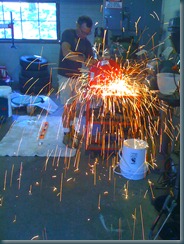 pieces (the depth of the tracks the rails were designed to slide into). I marked the drives with a felt pen to make sure I knew where the new rail pieces needed to end up, and then attached them with the mounting tape. In our case, it took a double thickness of mounting tape to get the drive in about the right spot, but once they’re in you can’t tell the difference. I’ve got more pictures of the build at my Flickr site, here. Check them out if you need more detail.  Check out the finished product! 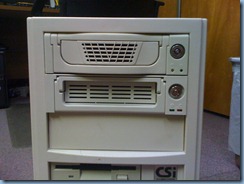 I’ve had an MSI Wind U100 (a slightly older, ten inch model) for a little more than a year now, and I’ve really liked having it. It’s super convenient for travelling. I replaced the RAM the week I bought it, bringing it up to 2GB. Ever since then it’s run Windows Vista, and now Windows 7 (thanks Technet!) like a champ. The only complaints I ever had were the battery life (now solved, thanks to an extended battery I bought online) and the touchpad. MSI used a Sentillec touchpad with the Wind which is unfortunate because the scrolling sucks when compared to Synaptics touchpads, and lately it had started being super flaky. Sometimes it would work and sometimes it wouldn’t.

Since the Wind has been out of warranty ever since I upgraded the RAM (had to break the warranty void sticker to open it up for the RAM), I decided to go the route of replacing it myself. I found a replacement touchpad on Ebay, and then found these two YouTube videos which showed step by step how to disassemble and then reassemble your Wind with a brand new touchpad. All in all, it was pretty straight forward, and the Synaptics touchpad is much nicer to use day to day.

Here are the videos in case you’d like to do something similar:

Heather and I have decided to try and consolidate all of our family blogs to one place, under the erquiaga.net domain name that I purchased a few years ago. This will be the new home of my blog. For anything prior to today, you can use the link on the right hand side to get to my Wordpress archive.

I know that I haven’t been the best at posting to my blog in the past, which is something I hope to remedy. I think it’s an important exercise, both for keeping up my own written communication skills, and to hopefully pass on some useful information to you, the readers. As we now have a family blog to chronicle our family activities, I think I am going to try and focus this blog more on tech topics (hence the new name). It should be a fun new adventure!